Even So, It Is Well 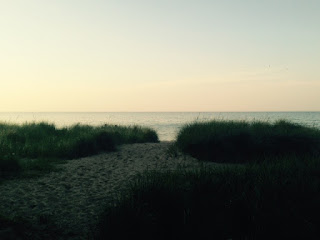 I've got an anxious heart. I have emotions that battle with reason, so that even when I know I'm safe my brain says fight or flee. Despite a notoriously calm demeanor, I have a mind that is often anything but calm. When I became particularly restless last night, I found my way to the beach. The sun was just beginning to set, the breeze was light, and the waves were steady and soothing. All thoughts were washed away but this: The God who holds this all together is holding me. It is well.

Listening to those waves I acknowledged that my emotions are sometimes out of my control. I can't always drive away anxiety or make myself feel hopeful or loving or kind. My head sometimes feels like a mess of clouds and overcast, a heart that doesn't know how to fully rejoice in this life.

Even so, my God speaks to storms, "Peace, be still." His face hovers over the water. The Lord comforts me. He talks of peace like a river, glory like an overflowing stream, and I know it is well with my soul.

My dear friend Abby got married last weekend. She was beautiful, absolutely gorgeous. Dancing with so many Trinity friends was a blast. And the sparkler send-off was the perfect way to end the night. 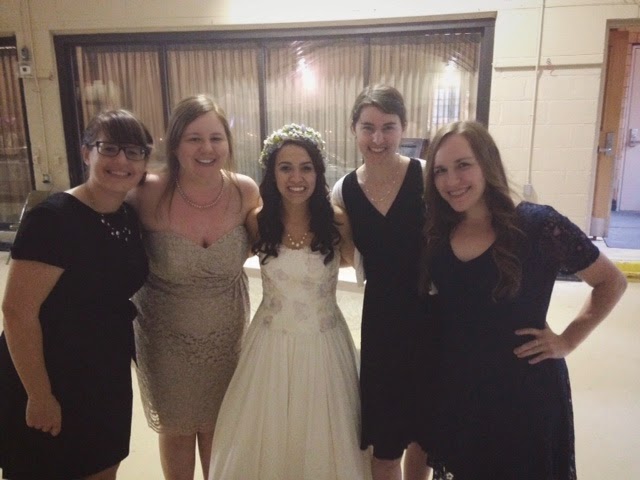 I cried on the way home.

Overwhelmed with happiness. God gave me the most wonderful gift by giving me this group of friends. His goodness was so evident to me in that moment. And I couldn't help thinking about me as a freshman, in the valley of depression, and how much I needed to know then that there would be days like this. There would be friendships and weddings, dancing and tears of joy. There would be nights when I fall asleep with this last thought: life is good.
Posted by Brittany at 9:02 AM No comments:

“Wherever you are, be all there.”

I am teaching myself to be fully present each moment. To not rush through the moments, the minutes, the days, the seasons. To believe that the next moment is not guaranteed, but there is this moment.

So I don’t hurry to arrive early to class. I take time to notice sunlight through golden leaves.

So I don’t check my phone habitually. I appreciate the people in front of me and I laugh with them.

So I don’t anxiously speed read the textbooks. I soak up what I can and thank God I get to learn about something I love.

So I don’t dread the moment the sleeping baby wakes up. I hold her and watch her smile at her dreams.

So I don’t stuff down the feelings. I let myself feel it all, the disappointment and the joy.

When I am fully present in the moments, life becomes full of moments, and that sounds like life abundant to me. My life is FULL, and I am thankFULL. 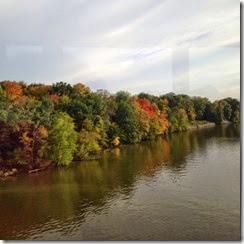 I am loving this blustery day.

I see falling leaves, and the spinning seems more like riding the wind than chaos. Maybe because I’ve stopped thinking of life’s turns as a loss of control and started letting myself be carried along.

Because the idea that I can control everything is an illusion, one I use sometimes when I need to feel secure.

But I don’t want to be a leaf that fears leaving the tree so much that the natural descent to the ground feels like spinning out of control.

I want to be a leaf that knows the seasons change and doesn’t fear the fall. A leaf that dances all the way down, swirling and spinning because this is exactly where I’m supposed to be so I might as well enjoy it.

Next Sunday I’m going to walk into Lake Michigan, fully clothed, and be dunked under the water. There will be some clapping, maybe some shouting, and then I’ll walk back to shore.

I’m going to be baptized.

This may be confusing to some who have known me for a while. I made a commitment to Christ eight years ago and have been actively pursuing a life of discipleship and ministry for the last four. Why get baptized now?

Eight years ago, I didn’t think it was necessary for me to be re-baptized. After all, I had been baptized as an infant. So it never crossed my mind.

The fact that I am now being baptized does not mean that the decision I made eight years ago wasn’t the real thing. Baptism doesn’t provide me with salvation, but it publicly identifies me as a believer. Marriage is a commitment made visible by the exchanging of rings, and so my commitment to trust Christ as my Savior is about to be made visible by my immersion in the water.

Let me be perfectly clear. I’m choosing baptism now because I want there to be no question about who I am and whose I am. My baptism is a public declaration that I believe in the saving grace of Jesus Christ. I am a new creation. The old has gone; the new has come!

“Do you not know that all of us who have been baptized into Christ Jesus were baptized into his death? We were buried therefore with him by baptism into death, in order that, just as Christ was raised from the dead by the glory of the Father, we too might walk in newness of life.

For if we have been united with him in a death like his, we shall certainly be united with him in a resurrection like his. We know that our old self was crucified with him in order that the body of sin might be brought to nothing, so that we would no longer be enslaved to sin. For one who has died has been set free from sin. Now if we have died with Christ, we believe that we will also live with him. We know that Christ, being raised from the dead, will never die again; death no longer has dominion over him. For the death he died he died to sin, once for all, but the life he lives he lives to God. So you also must consider yourselves dead to sin and alive to God in Christ Jesus.”   Romans 6:1-11

Posted by Brittany at 2:20 PM No comments: 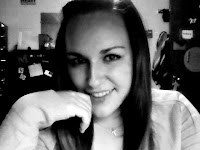 "These words, like most words, will be written next to midnight, between hurricane and harbor, as both claim to save her." -TWLOHA